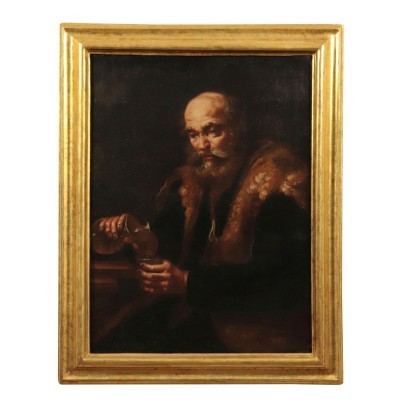 Oil on canvas. Portrait of a man who is pouring a glass of wine from a jug; he is wearing a fleece waist coat that reveals his pastoral origins already declared by his dirty hands. The same subject and dimentions, but different colors, charecterize another painting that had been sold in 2014 at a public auction and entitled "Allegory of the five sences" suggesting a possible allegoric meaning. That painting had been attributed to Monsù Bernardo, nickname of the danish aristist who was pupil of Rembrant in Amsterdam; after 1651 he moved and worked in Italy where dedicated himself comic and popular genere compositions, comic, giving particular attention to poors' world and painting them in a realistic way close to Caravaggio's paintings and ispired by the Bamboccianti School, without ignore scral painting. He was known for his allegories as Man Ages, Five Secnces and Four Elements. Even the painting in question can be attributed to such artist: even if it is of inferior quality than the one described, the particulars' performace such as the hands or the face's features, it shows an intence interpretative quality. Restored and displayed in a coeval frame.