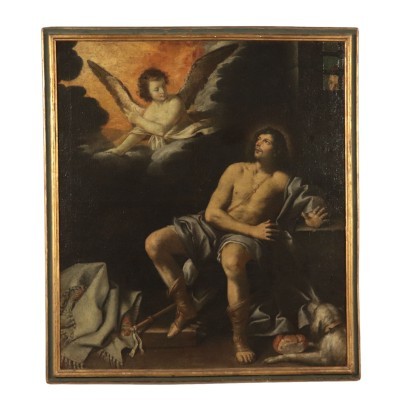 Saint Rocco Confronted By The Angel

Saint Rocco Confronted By The Angel

Oil on canvas. The big scene representsa moment of the life of Saint Rocco, the French peregrin and miracle worker that is considered one of the most invoked saints, from the Middle Ages onwards, as the protector from the terrible scourge of the plague and later from all the scourges and catastrophies that afflicted humanity. Even now, in 2020, during the pandemic, the Saint has been the recepient of prayers and invocations to protect from the virus in many Christian communities in the world. The Saint is pictured during his imprisonment, that will lead him to death, that he underwent in Voghera during his return from Italy to France, with the accusation of espionage because, miserable and tattered, he hadn't been recognized by anyone, and he could not justify his passage through tormented and suspicious lands. There are many of the iconographic attributes of the Saint in the piece: he is only wearing a cape, the sandals and the buckle that holds his bottle tied to his chest; at his feet, there is the cloak and the cane of the peregrin; on his right, a dog with a piece of bread that, accirding to the legend, the animal was stealing from the canteen of a rich merchant to feed the sick Saint; on his left thigh you can see the lesion, sign of the illness the struck him. The piece is attributed to the scope of Lorenzo Lippi (1606-1684), Tuscan artist from 17th century, recognizable from the dry style and inspired by reality, but in particular for the poses and the peculiar anatomical conformations of the figures he painted: you can confront the close correspondence between the angel of this painting and the one in the Sacrifice of Isaac, preserved in Saint Lucia of Montecastello, but even the posture of Isaac, sitting but reclined back with his legs open like Saint Rocco. in a pose that seems to belong to the production of the artist specifically. We know that the production of Lorenzo Lippi, who was not only a painter but a literatus as well, was almost complitely dedicated to the religious and devotional subject, painted not only for the public clientele (city and country Churches), but for private clients as well; even in the production of portraits, that were the reason for his trip to Innsbruck as the Court painter, the subjects of the paintings were often included in sacred scenes. For centuries, the figure of the artist Lippi had few acknoledgements, and he was criticized for being "too determined" in remaining faithful to his style, made of a "pure and simple imitation of nature", as if he was an artist with no creativity and not very inclined to embrace the pictorial novelties introduced in the artistic scene; in particular the flair of the Baroque is missing from his production as well as the adhesion to the taste of the Court of the Medici, based on splendour and the sensuality of the models, remaing tied to the archaisms of the previous century, in particular to the ones of Santi from Tito, to remain close to the religious feeling of the Florentine people and its confraternities. His compositions, however, respond to the precise balance, both formal and narrational, with scenes lit ina clear manner, with a drawing that is almost from the Renaissance, with plastic postures that highlight the feeling of the character well, with clear characterizations of the faces and the hands, that are always busy in an explicit gesturality, demonstrative of the contents of the scene. The painting proposed here, already restored and reframed, is presented in a frame in style.