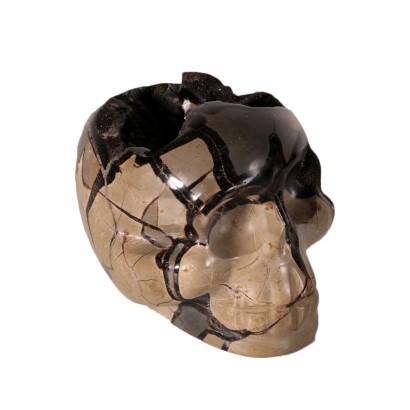 Septaria geode carved in a shape of skull. 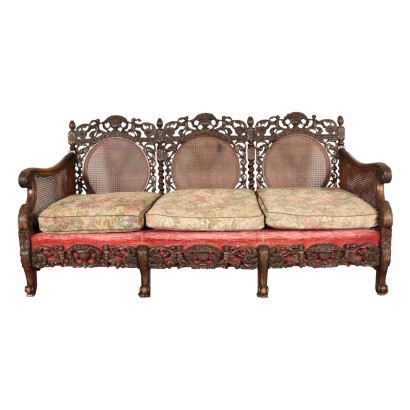 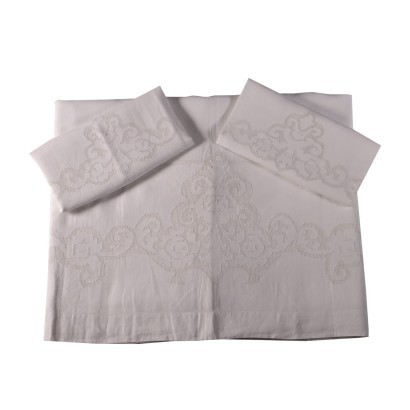 Fine linen double bedsheet with 2 pillowcases. Beautiful reversine made with a particular sicilian processing as the pillowcases. Good finishing. Good conditions, need to be washed to refresh the fabric. Pillowcases 55x85cm 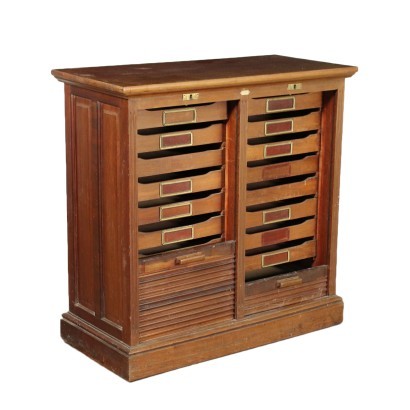 Office filing cabinet with “C. Schirolli & Co. " in mahogany, on the front it has two drawstring doors that conceal a chest of drawers for documents. 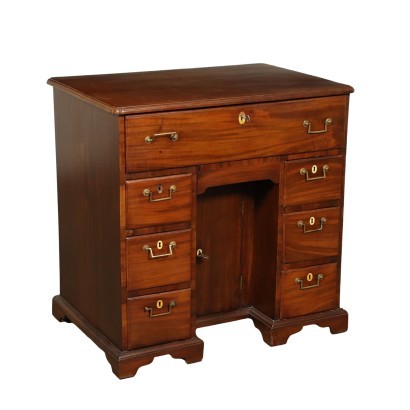 Small English writing desk, on the front it has three drawers on the sides and in the center, within a niche, a door. Under the top there is a drawer with various compartments and compartments in mahogany. In mahogany, the interiors are in oak. 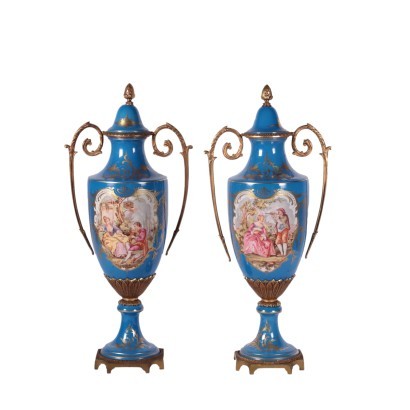 Pair of porcelain and bronze vases with gold decorations with plant motifs and gallant scenes applied inside reserves. Handles in bronze with leafy volutes. Brand of the manufacture under the base. 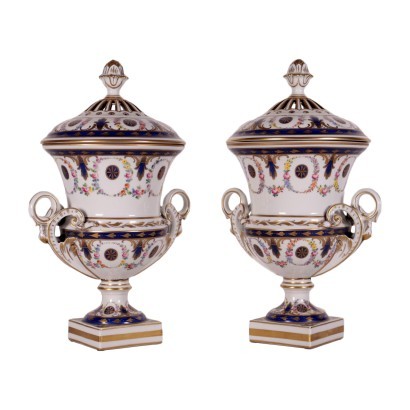 Pair of porcelain vases with gold decorations and polychrome plant motifs. Handles with leafy volutes and perforated lid with pinecone grip. Brand of the manufacture under the base. 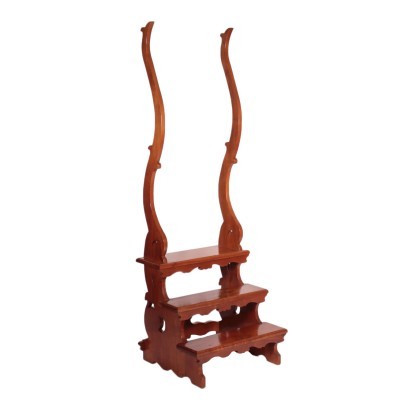 Library ladder in cherry, with wavy bands and uprights. 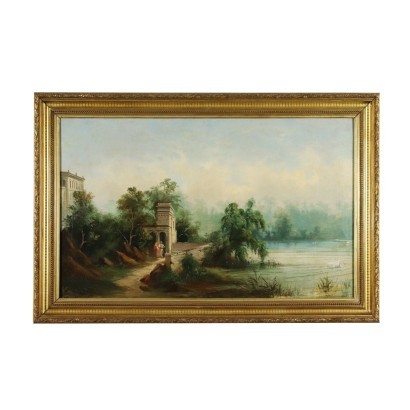 Oil painting on canvas. Italian school. Signed G. Bossi lower right. The large landscape offers on the right the glimpse of a pond with swans, in the middle of a verdant countryside; on the left, a couple on the path is accessing an architectural structure, an outbuilding of the villa of which you can only glimpse an upper corner. Suggestive and with a bucolic atmosphere, the painting is presented in a coeval gilded frame. 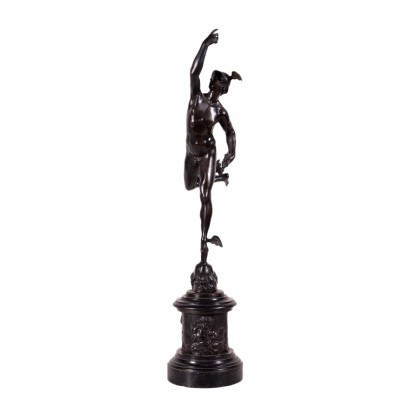 Bronze sculpture on a circular base in black marble. Statue depicting winged Mercury, messenger of the gods, supported by the breath of Zephyr. Copy of Gianbologna's work. 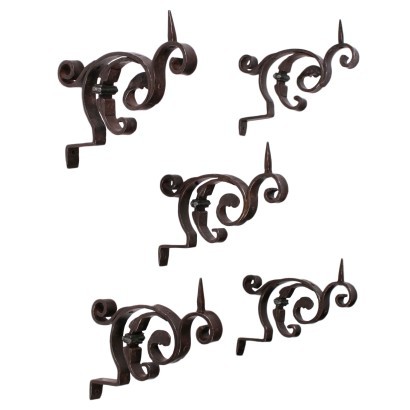 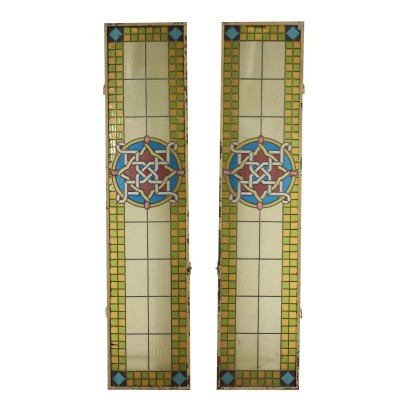 Pair of Liberty windows with leaded and colored glass, to create a rose window with geometric decoration and a Greek perimeter. 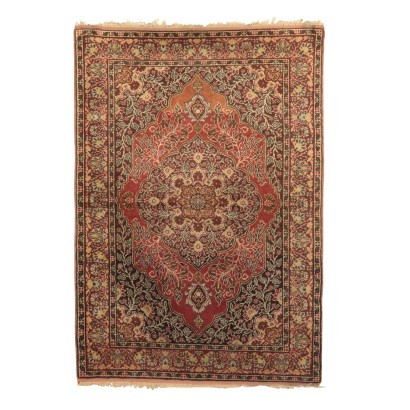 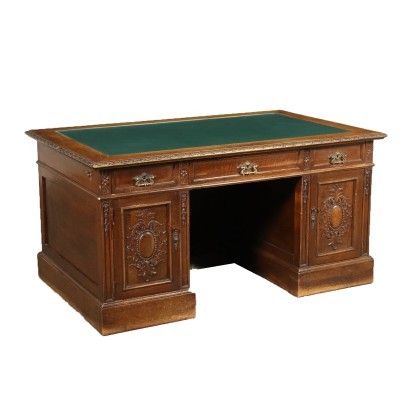 Desk in neo-Renaissance style, has two paneled doors surmounted by drawers placed in the undertop band. In walnut, it is decorated with neo-Renaissance carvings, the interiors are in poplar and cherry. 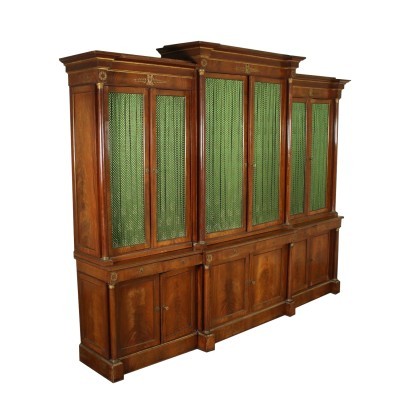 Large French Napoleon III bookcase, on the broken front it has two pairs of doors alternating with column uprights resting on a plinth, to support the slightly protruding band in which there are drawers. The upper body repeats the same movement, but with large doors with grating and embroidered fabric with Empire-style motifs. Veneered in mahogany and mahogany feather, decorated with bronze empire-style applications, the interiors are in oak. 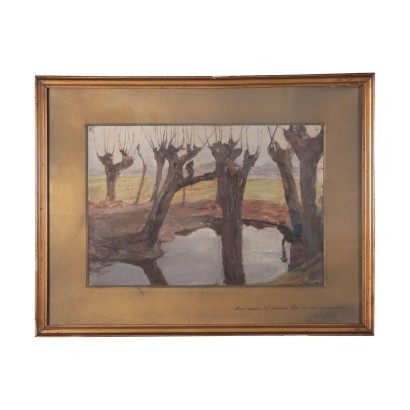 Oil on canvas. Signed bottom right. Signed dedication from the artist "To my teacher prof. Giovanni Fossi, with deep gratitude" on the passepartout. Title on the back and additional signature. Early work of Pietro Leidi, Brescian painter, deaf and mute from birth. He was artistically educated in Lugano as a student of Luigi Rossi in the beginning, then in the Academy in Florence. Back to Brescia, he opened his own atelier and became part of the "Group of indepent Artists" of the city. He is known mostly as a landscape painter, painting landscapes characterised by bright skies, and solidly constructed closeups with rich colours; glimpses of his native land and the Alps are particularly frequent. His work can be seen in many important collections, both public and private, in Milan, Turin, Genoa, Venice and Brescia. Coeval frame. 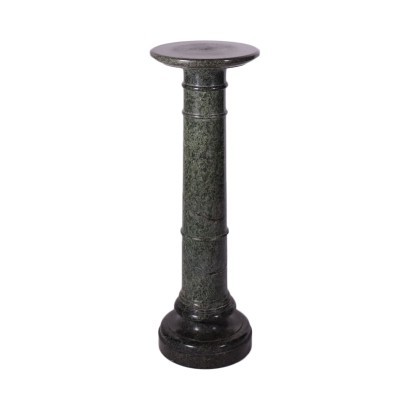 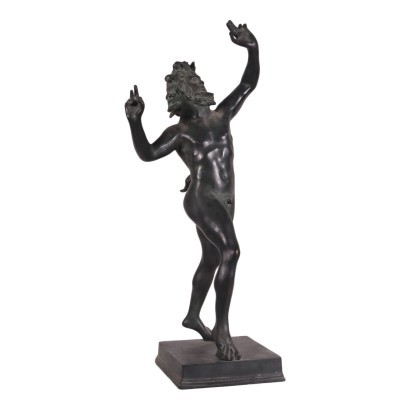 Bronze sculpture representing a dancing faun. Bronze with archaeological patina, copy of the statue coming fron the House of Faun in Pompei. 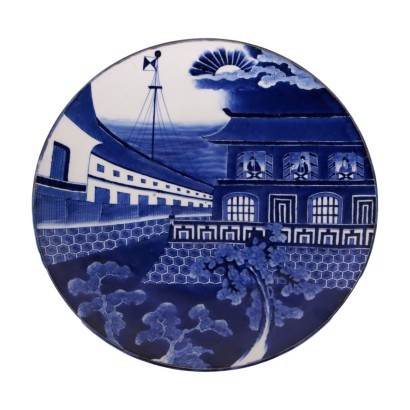 Big Arita ceramic plate, blue underglazed decor, perpective of a castle surrounded by a moat and walls. Glimpse of its inhabitants in the windows. Signed HIGUCHI under the base. 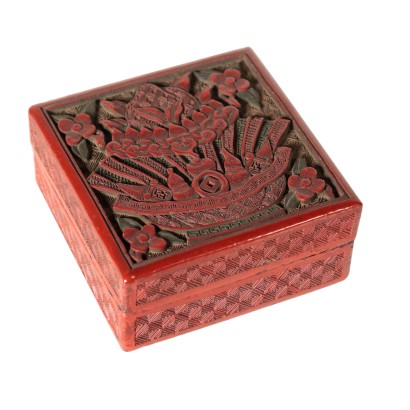 Cinnabar red lacquer box, engraved and decorated with good omen Buddhists symbols, flowers and longevity peach in the middle, ruyi surrounded. Rhombus pattern engraved in the lacquer on the bottom and on the sides. End of Qing period (1644-1911). 20th Century.