Sconces, candlesticks, candelabras, wall lamps, ceiling, table: in this section all l'lighting Antique is available in our catalogue.

You have lighting that is similar to sell? Contact us! 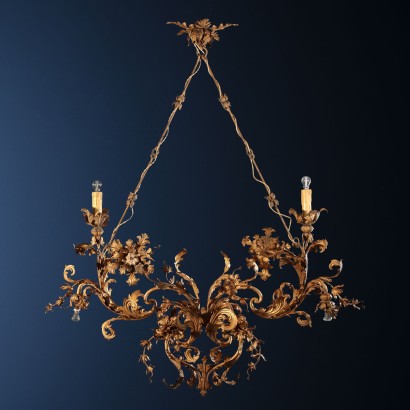 The chandelier, which was created in the NINETEENTH century by combining two large wall to wall of the baroque period; they are made of wrought iron, sheet iron worked wooden parts, to imitate the branches of flowers, all gilt. Two large volutes wrought iron, radiate the various branches to which are grafted, by means of rivets, the large acanthus leaves in the sheet. The flowers are composed of petals in sheet iron, whose hearts are made of wood and placed in the one that represents the pistil; two flowers facing the other serve as gate-cero, now electrified. United states in the 800 to form a unique chandelier, have been added to the irons chained together ending in a tuft in the golden leaves where the chandelier attaches to the ceiling.