In our catalogue you can find Objects and Works of Art from the XVI century up to our days.

Ancient art, icons, contemporary art, ancient art, art of the'800 and '900; this section is our "Gallery" 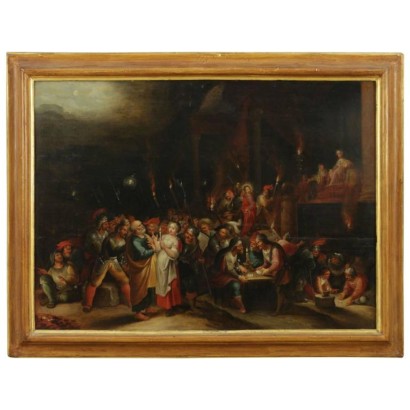 Oil on oak board, coming from an important historical Florentine collection. The collection started by an ancestor of the family who was in Vienna in 1798 and then in Wurzburg until 1813, as a companion of exile of the Grand Duke of Tuscany Ferdinand III. The collection was transferred to Florence after the fall of Napoleon, and its importance is proved by a copy of an inventory compiled in 1881. At number 14 of it (corresponding to the one shown on the cartouche at the back of the table), the compiler's description:...a two feet and four and a half inches long wooden footboard, and one foot and eight and a half-inch high, representing Peter who denies Jesus Christ to the maiden in Anna's house. We see the Savior from far away carried to that pontiff to be examined, in the midst of a crowd and a quantity of soldiers. In the 1960s, an initial attribution to Bruegel was denied and relocated to Francken. The composition was obviously successful because other versions of the workshop were known (see for example, an oil on copper with identical subject and dimensions in the Koller auction on 18/09/2015). Presented in a refurbished frame.